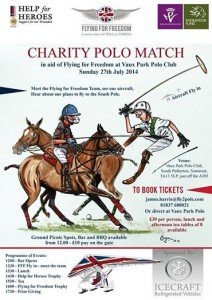 Icecraft are very proud to be sponsoring the Flying for Freedom and Help for Heroes Charity Polo Day held on Sunday 27th July.

All of our customers are welcome to attend for a fabulous day out and to cheer on Icecraft’s very own team. So come along, have fun and support 2 incredibly inspiring charities at the same time!

Flying for freedom are mounting a daring expedition to the south pole to highlight how flying can help injured service personnel make a successful transition back into civilian life.

Post-recovery flying activities demonstrate what is possible for often severely disabled people to achieve. This can inspire those still in rehabilitation. FFF seek to enable recovery for our wounded, injured and sick, by supporting them through Microlight flying training.

Feedback from trainees has proved to be overwhelmingly positive about the benefits they gain from the new found freedom discovered inÂ Flying for Freedom.

2013 saw Icecraft’s best season yet as not only were we blessed with fabulous weather Icecraft won 80% of tournaments they entered. With 2 tournaments at Cowdray ending in a closely fought Subsiduary Final, they were beaten by just 1 goal. Icecraft won the Icecraft Challenge at Vaux (LUCKILY!!!), The Frogmary Green Trophy, The International Trade Services Tournament and the Evening Flood lit Polo Match at the Sand Banks beach Polo match and many more!

With the wettest summer in decades it was a rather soggy season but the team made the best of it, winning some large away games and taking the whole team and 18 ponies to play in the glorious sunshine of Chantilly Polo Club, France – as instead of looking for other counties to play in we were forced to look at other countries!!!.

Team Icecraft saw a fantastic start to 2011 by winning New Zealand’s largest 2 Goal tournament held in Kihikiki NZ, having defeated 14 teams over 5 days and winning the finals 8-2 making a rather long journey very much worth it! The team consisted of the legendary Brett “Brettski” Hamer, Glen “G-unit” Armstrong, Emma Holmes and Justin Macrae.

The acquisition of 4 new ponies to add to the existing 16 meant that the team were excellently mounted all season, with the Lorry having to make a pit stop to the Icecraft factories to have a chassis extension fitted to enable it to take 12 ponies.
Although the UK Sunshine didn’t quite match up to New Zealand, the team had convincing wins at Lynt Polo Club, Vaux Park, Cirencester Park and Druids Lodge. 2011 ended on a high note, with Glen, Justin and Emma each going up in handicap – which means the pressure will certainly be on in 2012! 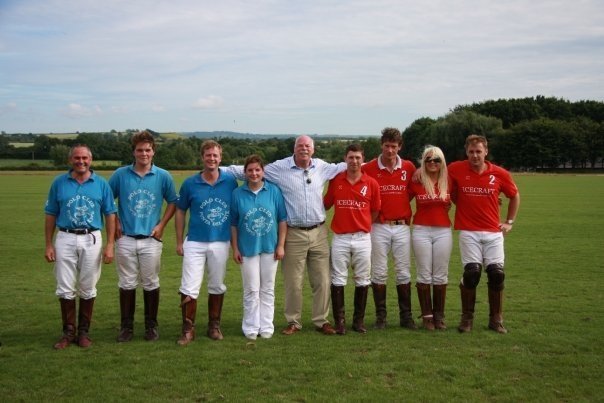 The horses are currently all turned out, getting fat and having a well-earned rest until March 2012 when the fitness regime starts once again for the beginning of the season.

Icecraft are hoping to hold an open day at Vaux Park Polo Club in Summer 2012 to celebrate it’s 25th birthday, with a chance for all of our customers to get together and have a fantastic day filled with champagne and polo! Further information and invitations to follow.